Captain Hanna was killed at Centuripe on 2nd August 1943 when leading ‘D’ Company during the Irish Brigade’s epic assault on the hill-top town, which was the fulcrum of the German defensive line to the west of Mount Etna.

William Hanna began his army career at Sandhurst in July 1939 and was commissioned into the Royal Ulster Rifles (RUR) soon after the outbreak of war. During early 1940, 2nd Lieutenant Hanna joined up with the RUR at their depot in Northern Ireland and a fellow subaltern (later Major General) Corran Purdon would remember Hanna from that time:

“I had travelled over (to Armagh and then onto Ballymena) with Teddy D’Arcy…and Bill Hanna, a fine athlete against whom I had played matches for Campbell College when he was at the Royal Academy in Armagh. Bill had represented Ulster at rugger, cricket and hockey. I remember being tackled by him – it was like being hit by a charging bull” 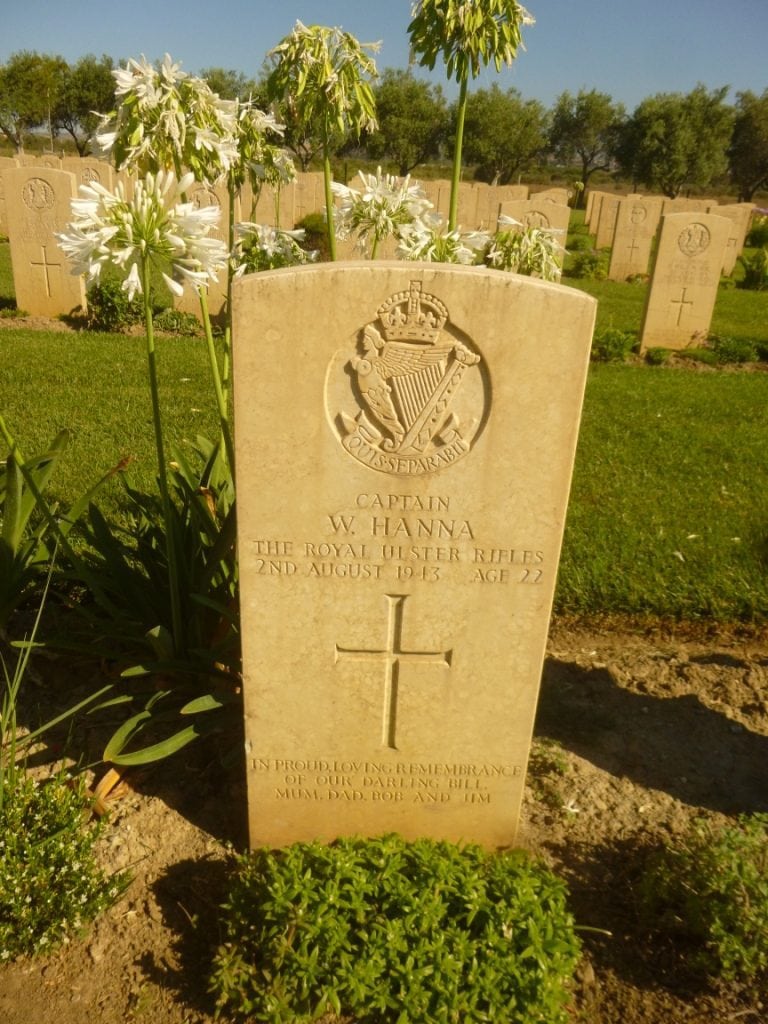 Lieutenant William Hanna travelled to North Africa in early 1943 and towards the end of the Tunisian campaign, he joined 1 RIrF as a Platoon Commander in ‘A’ Company and then lead the platoon during the final battles on the Djebels north of Medjez-el-Bab. He would take over from the very badly wounded Major John Horsfall as Company Commander of ‘D’ Company before the Faughs began an intensive training period in Algeria and Tunisia prior to the Sicilian campaign.

William Hanna had been born in Armagh in 1921 to Susan and George Walker Hanna and was the youngest of three brothers, the other two boys being Robert and James, the latter of whom was Michael Thompson’s maternal grandfather. Trooper James Hanna served as a driver mechanic with the North Irish Horse in North Africa and Italy from 1943 to 1945.