While this lull had been on, I had gone back to Rome with Dan Kelleher to see how the Pope would react to a formal visit from the Irish Brigade. The advance was going so quickly that it seemed a question of now or never. Everyone in the brigade of all denominations seemed to think that it would be a good thing to do. The Pope thought it would be a good idea too. The only trouble was that, being on the fringe of the battle as we were, it was impossible to send more than a representative body. However, subject to battles, I arranged for a hundred and fifty odd to visit the Pope on the 12th of June. I was only sorry it wasn’t the 12th of July. The General agreed to this and said he would be prepared to do without me, the COs and the party I was taking out with me. 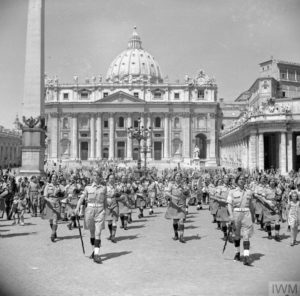 On the evening of the 11th, we got orders for the brigade to move again and move quite a long way. We were scheduled to leave for Civitella early next morning. It was about 40 miles to the north. We would then be in the lead again. However, with the state of congestion on the roads being what it was, there was not much chance of being able to do much that day.

I handed over to John Horsfall and set off for the Vatican early on the 12th. A special audience had been arranged with the Pope and it was to have been at ten o’clock, but at the last minute the Papal authorities had changed it to nine. The only snag to this was that I was unable to get hold of the official photographers that I had laid on for the most interesting part of that memorable day.

At a quarter to nine, we ‘fell in’ in military array in the neutral territory of the Vatican City and marched behind the Pipes and Drums up the steps of the Vatican. We were led by gorgeously dressed officers through courtyards and ante chambers until we eventually arrived in the audience chamber. There had been great competition among the warriors to join the party. I had to lay down, therefore, that all the ORs going were to be Roman Catholic chosen on the basis of length of service in their battalion. It may seem strange that it was necessary to put in the religious clause but many influential members of Orange Lodges were trying to get a seat in the party by virtue of their high rank or long service. I gave a quota of six officers to each battalion. These could not entirely be filled on the religious score, so I made Irish nationality a requisite qualification. The ‘heretic’ element was almost entirely made up of out and out Orangemen. I would like to mention a few names, both of these officers, and of some of the other ranks, who afterwards visited His Holiness, but it might be unkind to put their names in print and have them read out in their local Orange Hall at home.  There is, however, one exception to this to which I will refer later.

We formed up in the audience chamber with the officers on the flanks, the Pipers in front and all the troops behind them. It was a fine room and well suited for the occasion. There was something very impressive about the Vatican. Such wealth of history lies behind it. The Swiss Guards, the Noble Guard, the highly placed Primates, all in medieval garments, added to the atmosphere. I took up position in front of the gathering with Hugh Montgomery of Five Mile Town, who was secretary to the British Minister, and who had helped to arrange the audience. At nine o’clock, the Pope entered, surrounded by his Noble Guard and gave an excellent address in English in the following terms.

“Dearly Beloved Sons, We bid you welcome. You belong to the nation which has ever belonged to God’s church since St Patrick.

We are well aware of the good which the Irish have done in spreading the faith from the shores of their green isle into the United States of America, Australia, South Africa and many other nations.

We greet you and bless you with all our Heart’s affection, and your dear ones at home. God be with you always. We bless also all the religious objects you have with you.”

After his short address, he gave the Papal Blessing.

I presented His Holiness with a scroll in memory of our unique visit, which he was very pleased to accept. I asked him if he would like to hear the Pipers. He said he would and they duly struck up, of all inappropriate tunes ‘The Wearing of the Green’. Everyone seemed to enjoy the Pipes. After this, all the officers and men present were presented to the Pope and he spoke to many of them personally. He had told one of his Cardinals that he was very much looking forward to this visit of the Irishmen and judging by his manner, it certainly seemed to be true. After the presentations were over, another tune on the Pipes was suggested and nothing daunted, they started up on another rebel tune, this time ‘The Minstrel Boy’. However, it is a fine old air, which the Pope thoroughly enjoyed. It was then time for him to depart.

We had been with him for about half an hour. He said goodbye and I called for three cheers followed by a ‘Faugh a Ballagh’ one. With a smile and a wave of the hand, he left the room and the appalling yells and shrieks produced by the Faugh a Ballagh cheer. Dan Kelleher, who had played a leading part in all the proceedings so far, I think hopes to be made a Cardinal out of it, had laid on a special mass in St Peter’s. We marched round St Peter’s Square a couple of times led by the Pipes and Drums and into the cathedral where we all attended the mass.

After this, the Pipes and Drums beat Retreat on the steps of St Peter’s. This was a great success especially among the innumerable Irish priests, who always frequent Rome. They went mad with excitement, shouting for their favourite tunes. I had to lay on one or two of these to keep them quiet. Of them all, I think ‘The Boys of Wexford’ was the most popular. They were great chaps, these Irish priests. Many of them had done splendid work looking after our prisoners of war and doing many an act of gallantry and kindness on their behalf. One day, I hope, the full story of the good they did will be published.

It is matter of great concern to all of us from who come from Ireland that when the war is over, it will only be remembered against her that Eire was neutral. What we hope is that all the magnificent deeds wrought by the sons of Eire in this war, against the barbarians of Germany and her Allies, may be remembered to her credit. It is sometimes overlooked that the services of every Irishman from any part of Ireland are given of their own free will for the good of the cause, be they fighting men or those priests, who helped the English prisoners in Rome.

I had lunch with the Eire Minister to the Vatican that day. Dr Kiernan and his family proved to be the most delightful friends, who many of us got to know well afterwards. They were deeply interested in the doings of the Irish Brigade and the Minister felt that in wishing us well he was representing the feelings of both his government and country. They drank the health of the Irish Brigade in champagne.