Air photographs were of inestimable value during these and subsequent battles. They had marked on them and numbered certain obvious reference points that could be identified on the ground. My aim was to have sufficient copies of these for issue down to company commanders. FOOs, and troop commanders of tanks. These photographs were also held at the gun positions. The rapid calling of fire could thus be done very quickly by anybody who had his photographs handy and, if the photographs were gridded, maps were quite unnecessary. They were invaluable to me in determining objectives and their reference points have a very quick, simple and secure way of passing orders and information over the air. 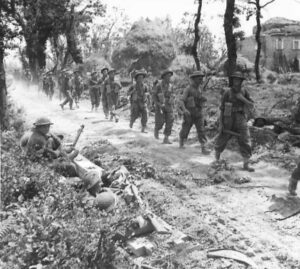 We used wireless exclusively during these early days of the advance. Line would have been quite useless with all the shelling and movement of tanks. Our wireless communication was excellent throughout, thanks to Ronnie Laming and his signallers, especially the chaps who manned the sets at Battalion HQs under pretty hair raising conditions. We all got pretty good on the wireless and learned to express ourselves briefly and to the point. I remember on one occasion being asked what the intention of the battalion was tomorrow and making myself quite clear by saying ‘Fart and fly forward”. What the German intercept services thought of our methods, I do not know, but the General told me that we had badly misled our own J services, whose job it was to listen in to forward nets and pass back what was happening to Corps or Army. It seems they never could make head or tail of what we were at and they were most indignant about our air photograph reference system for which they had no clue.

About this time, I insisted that the COs in an infantry-cum-tank battle should exercise command from a tank. When I told John Horsfall he had got to do this, he seemed most dubious about it, but since then has become a complete convert. At first, the commanding officer and squadron leader shared a tank. Later, we found that it was better for the CO and Battery Commander to be together. The advantages of this tank riding was that a CO could get around in some degree of safety and exercise command far more thoroughly than he would ever have been able to do on his feet. It also provided two additional links of communication for the commanding officer during his battle. He was in touch with his adjutant, all the available guns and the tanks.

The Skins did no fighting during this day, the 16th, although there was a good deal of shelling in their area. That evening, owing to the successful operations of the day, the Skins were able to close in and have a good sleep.

The next item on the programme was for the Faughs to capture ‘Fernie’ on the 17th. Up until now, they had fortunately been able to have a reasonably quiet two days and very little shelling in their area. They were able to occupy the comfortable dug out accommodation, constructed with such sweat by the Bosche. I was very glad, in that respect, that the Faughs had moved up on this night as we had a very unpleasant air raid during the night in the area, where they had just left and around the Brigade HQ. Rollo Baker was just outside our dugout when it started and he had got into a slit trench with his driver.

An AP bomb lit on his driver’s kit which was on the lip of the trench and about two yards from where he was. They both had a lucky escape. Collins, my wireless operator, was sitting in the old ark just about in the same place, passing some lengthy sitreps in code at the time. These very unpleasant bombs were falling all round him, but he went on with his message without so much as a falter in his speech. The only casualties we suffered were to the crew of my tanks, who were lying beneath it and got a few splinters.